Born 18th May in Westminster, London, the youngest of three brothers.  His father, the Rev. Arthur Grant Morris is at the time Curate at the church of St. John's Smith Square, Westminster and is an accomplished amateur violinist.   Musical soirées are held at the family's Ecclestone Square house.

The family moves to rural Somerset when his father is appointed Rector of the parish church of East Quantoxhead. The poet Cecil Day Lewis, himself the son of a clergyman, and his first wife are frequent visitors.  Adrian has a fondly remembered childhood at the rectory, close to the beach and Quantox hills, with dogs and woolly monkeys as pets.  His mother is sensitive to creative pursuits which she encourages in her sons.

After the outbreak of war his father joins the army as a Chaplain, and at the invitation of family in America his mother takes Adrian and his brothers to stay with them in Annandale on Hudson, USA.

Attends The Putney School, Vermont, USA, a mixed progressive school dedicated to 'the cultivation of the imagination and creativity through the arts' where his precocious talent as an artist is given full rein. Paintings are chiefly gouache on cardboard and are greatly influenced by the surrealist movement that was active in New York at that time. From the age of fourteen he determines to be a painter.

Through family friend and mentor John L. (Jack) Sweeney, Professor of Poetry at Harvard, he visits the studios of artists Yves Tanguy, Jean Helion and Andre Masson and while recovering from a serious ear infection he is kept provided by Sweeney and his brother James, a director of the Museum of Modern Art in New York, with books on art and surrealist literature which has a profound and lasting influence. The paintings of Georgio de Chirico hold a special appeal for him. During vacations in New York he frequents Peggy Guggenheim's gallery Art of this Century. Leaves Putney School in 1946.

Called up for National Service he joins the Royal Horse Guards and is posted to Germany. Finding army life dull and monotonous, and frustrated at not being able to paint, he turns to his other great interests - literature and poetry. His reading includes Gilchrist’s biography of William Blake, and works by T.S. Eliot, Connolly, Huxley and Shelley. He gets pleasure from listening to classical music on the radio and stimulating exercise from gallops on the horses. 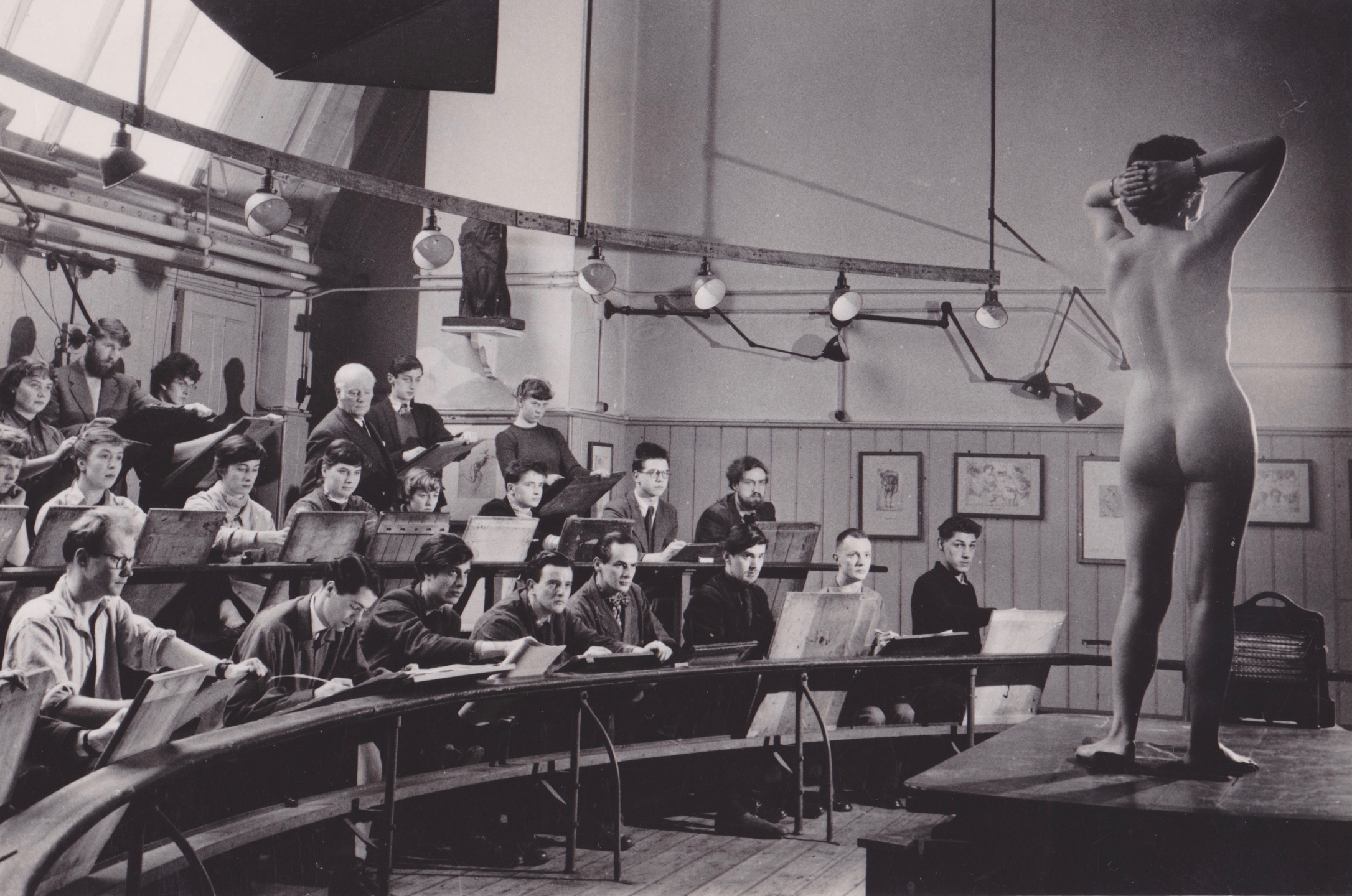 Paintings included in 'Artists of Fame and Promise' at the Leicester Galleries in London. Given a solo show of paintings and drawings at the St. George's Gallery, London, which includes a number of drawings and large tempera paintings of the crucifixion produced while at the RA Schools.

Paintings included in Leicester Galleries 'Winter Exhibition'. Marries Penelope Dendy and moves to Brighton, returning to London after a year to live in Chelsea where son Alexander is born in 1958.  (Marriage dissolved in 1961). Takes up part-time post teaching art in Surrey. Painting barren landscapes and river deltas.

In April, marries Audrey Baker. They regularly visit galleries together and go to a Francis Bacon exhibition on their first date. Although reclusive as an artist he is outgoing in his social life and they are involved in the lively 60’s art scene in Chelsea with a wide circle of friends including artists, writers and poets. They have two children, Zara (born 1968) and James (born 1969).

Debris and pipelines begin to appear in the desert landscapes but are later eliminated.  Reworking of paintings is a process that continues throughout his life.   Teaching art and pottery part-time at London secondary schools.

Tower blocks now begin to appear in paintings of otherwise barren land. Inspired by the space exploration programme commences series of sketches and paintings of astronauts and views of earth from space.

Participates in group exhibition 'The Poetic Image' at the Hanover Gallery where the gallerist Erica Brausen is supportive of his work.

Moves house and studio from Chelsea to Clapham. Continues to teach.  Paintings inspired by photographs of aerial views of oilfields, harbours, airfields and excavations are again as if observed through a window or hatch. Dominant themes are the earth and its vulnerability to both natural and man-made disasters.

Continues at every opportunity to sketch ideas for paintings especially when away from his studio, teaching.  Starts series of three paintings of solitary refugees.

Group of sixteen paintings exhibited at the Hayward Gallery, London as part of the Hayward Annual '78. Invited by artist Liliane Lijn, his work is well received and his inclusion in the show leads to articles and reviews in Harpers&Queen and Artscribe.

Although a dedicated painter all his life, he was reserved in showing his work and subsequently exhibits only seldom in group shows.

Returns to London, the family accompanied on the return voyage by the poet T. S. Eliot who had been visiting Harvard.   Studies for a year at the Anglo French Art Centre in London, an experimental school where artists from the École de Paris including André Lhote and Oscar Dominguez come to teach. Fellow students Michael Wishart and Sri Lankan painter Ivan Peries become lifelong friends.  His parents by now have divorced. 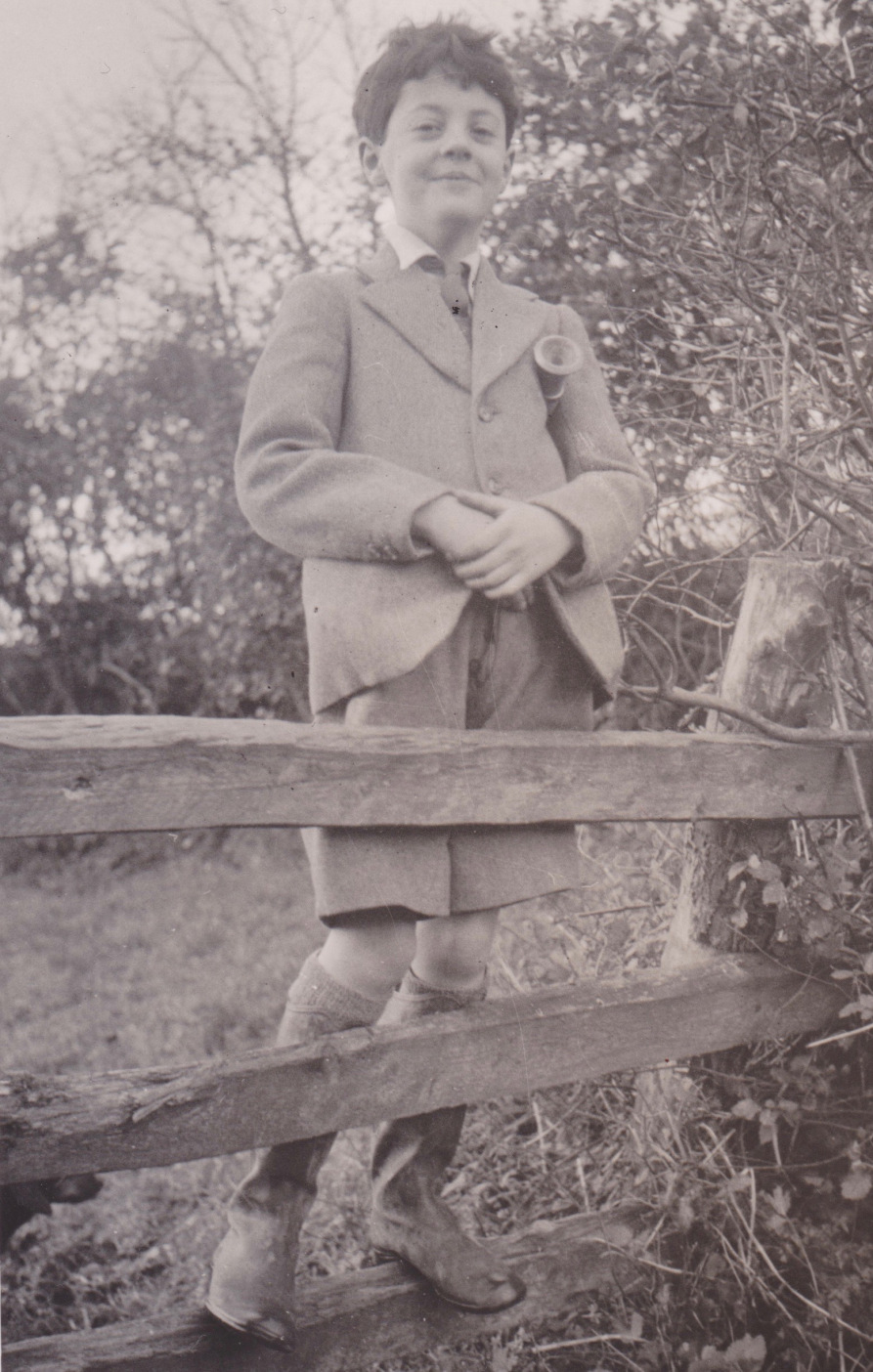 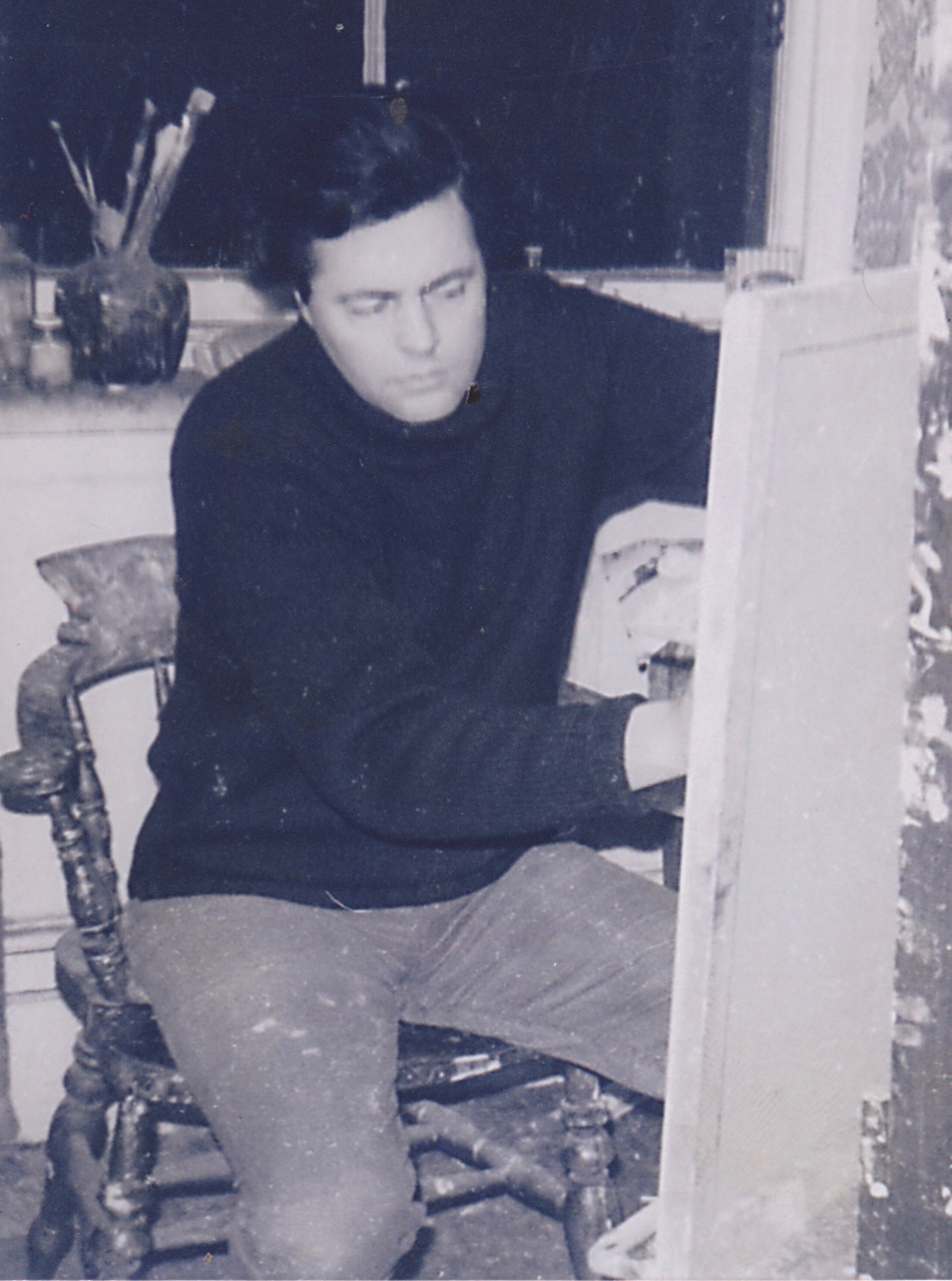 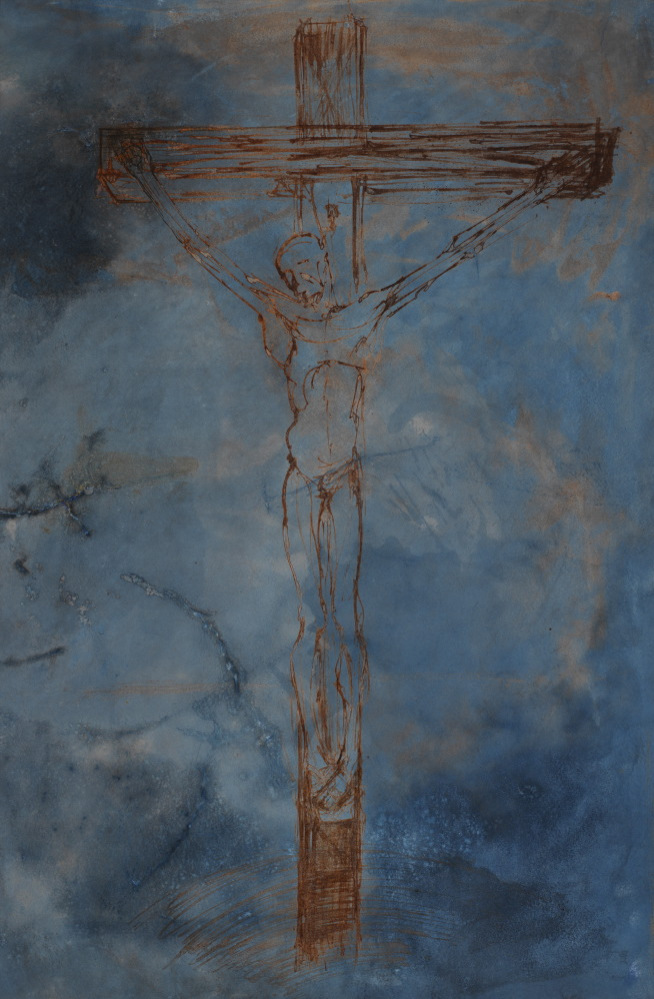 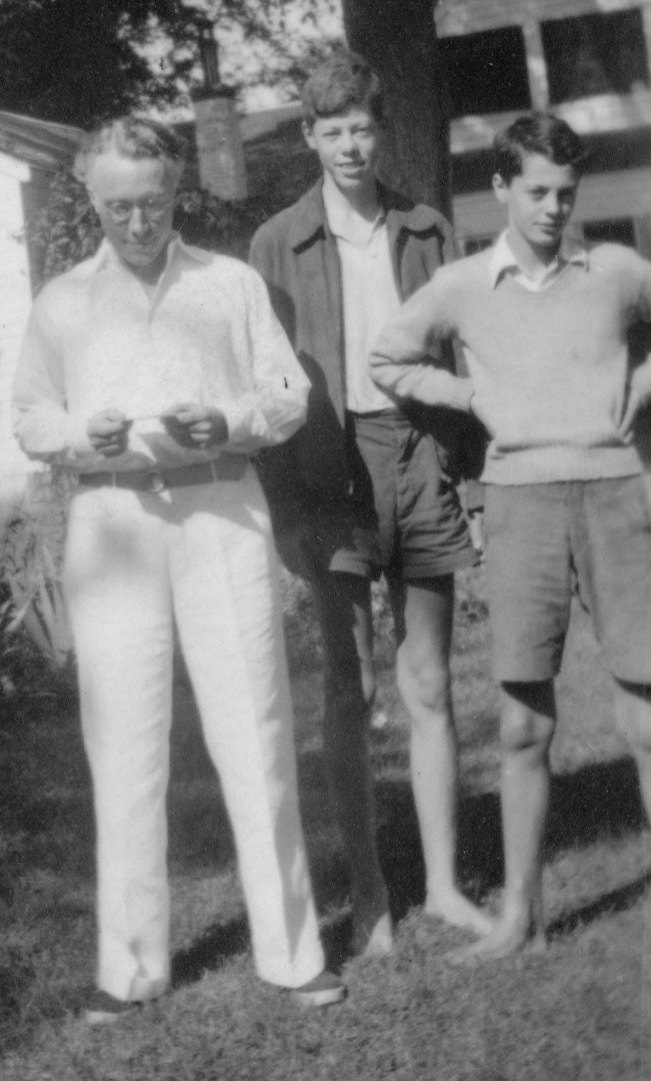 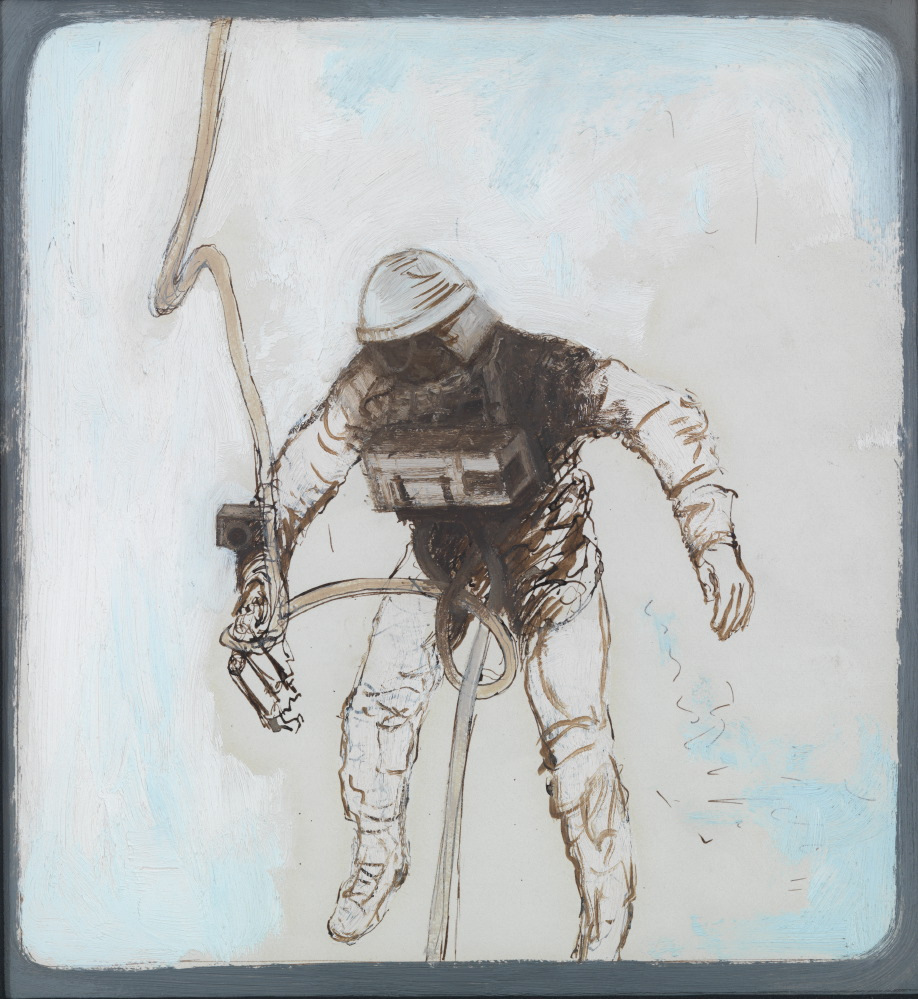 Occupied with a series of paintings of architecture: interiors, windows and doors. The scenes are now mostly depicted from outside or within the building rather than from an aerial perspective. Begins to introduce a gradated light and hazy shadows. Figures, present in the paintings during initial stages, are eventually totally erased from the finished paintings while the buildings they inhabited remain.

Becomes interested in exhibiting again and starts to show people his work with a solo show in view. 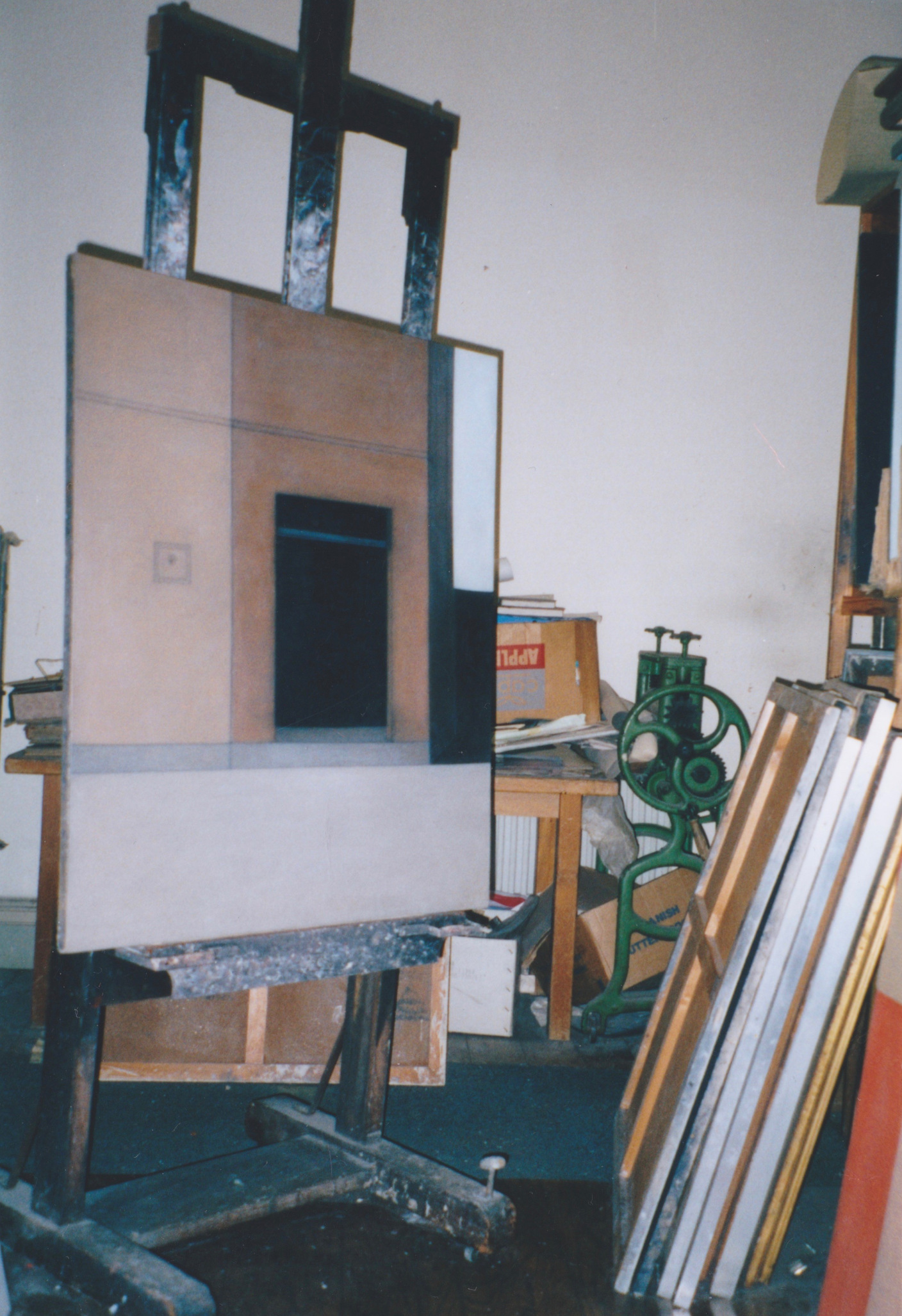 Adrian, on the right, with his brother Michael and John L. (Jack) Sweeney

Works on paintings related to the genocide in Cambodia. Images are sourced from newspapers and colour magazine supplements.

Retires from teaching and paints full time. Over the next decade he continues to slowly develop and refine his techniques and imagery. As ever studio visits are rarely permitted.

A major reassessment of an early group of landscape works is brought about when a flood in his studio prevents him from working. These paintings are reworked, edges of forms are sharpened. New paintings return to landscape. Motifs recall the earlier group but facture and palette is much changed. Comments that he would like to be thought of as a painter of geology rather than of landscape.

Begins a new painting inspired by photographs of Mars: 'Rocky Outcrop'. Diagnosed some years earlier with a serious heart condition which was thought to be under control, he dies suddenly and unexpectedly on December 6th. Obituaries appear in The Times and The Independent. He leaves behind more than seventy paintings and many hundreds of drawings and other works on paper. 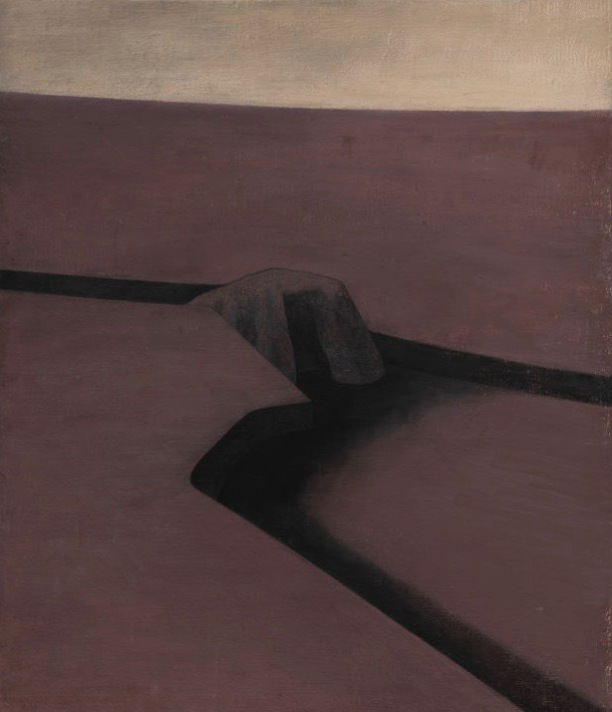 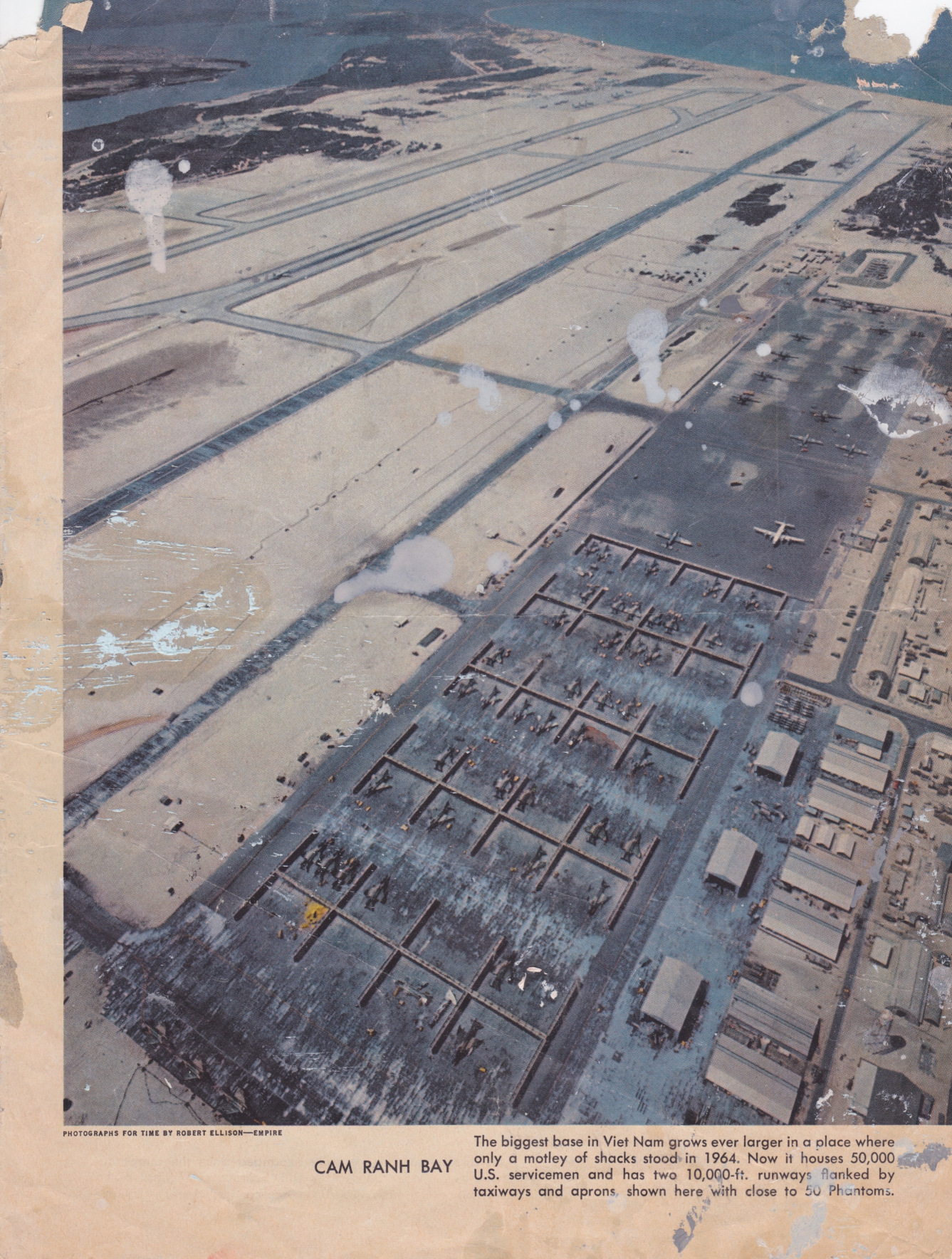 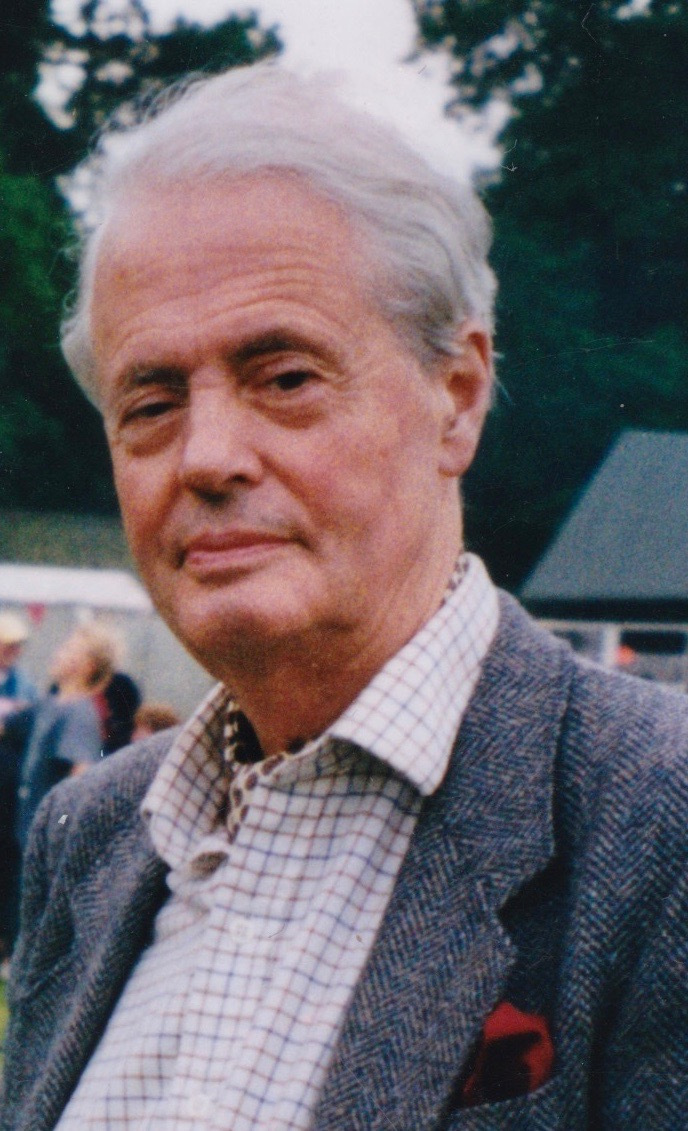 Works intensely on elemental claylike landscapes, in oil on gessoed panels.  Notes 'My aim is to compact and to concentrate, to solidify and make concrete, to gather energies inward rather than release them outward'. 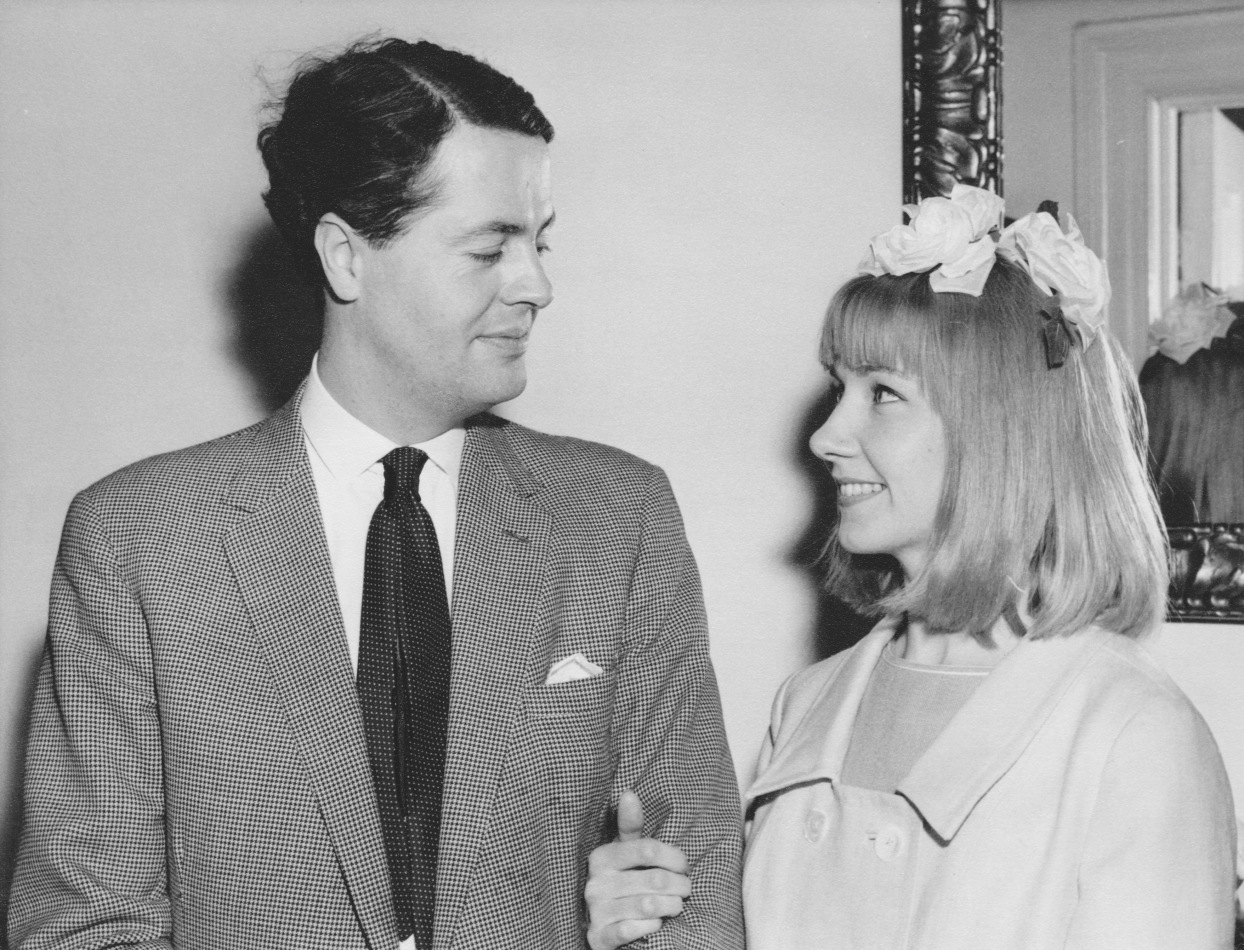 Retrospective exhibition held at the Redfern Gallery, London with catalogue including an essay by Richard Cork.

A further solo show focussing on works on paper held at the Redfern Gallery and paintings included in three of their group shows over the next few years including Aspects of Landscape in 2014.

A seminar on his work linked to the 40th anniversary of Hayward Annual '78, initiated by Merlin James, is held at Camberwell College of Art, London.  In November an exhibition takes place at an artists' gallery, Le Bourgeois, London.

Artist and critic Merlin James, recalling being impressed as a student by Morris's paintings in the Hayward '78 exhibition, mounts a show of paintings with his partner Carol Rhodes at their not-for-profit gallery 42 Carlton Place, Glasgow.

A two-person show, with Carol Rhodes, is held at a project space in Balfron Tower, London. Matthew Pang, a postgraduate student, begins to visit the studio regularly to catalogue the paintings and drawings. Curator Tenzing Barshee visits the studio after hearing about the Glasgow show.

Maxwell Graham mounts an exhibition of late works at his gallery Essex Street in New York City opening on 3rd March. Due to lockdown over the Covid-19 virus the gallery closes a week later re-opening for a final week at the end of July. 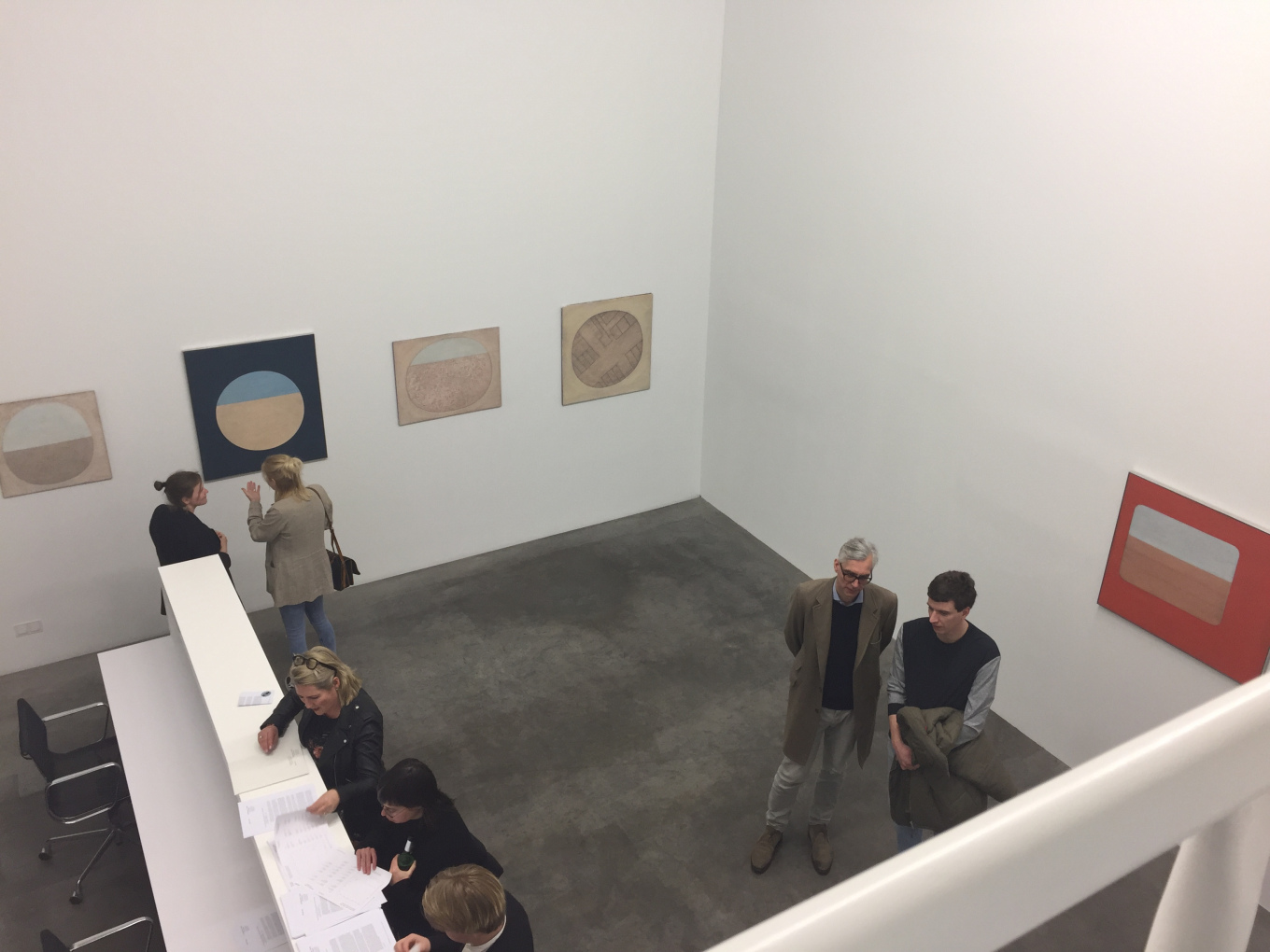 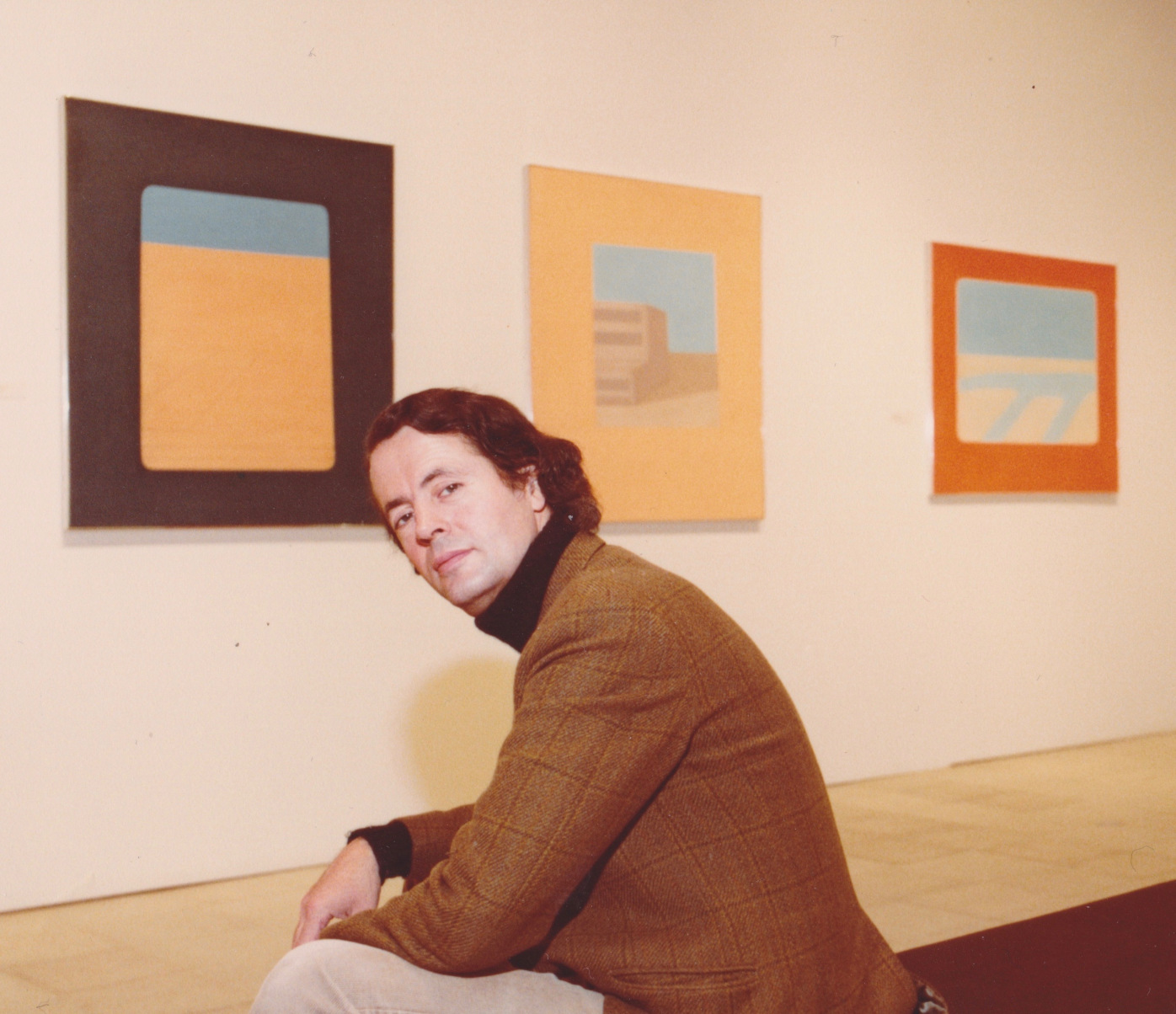